In this work, self-similar expansion of one-dimensional collisionless plasma into vacuum has been analytically calculated for non-Maxwellian particles. The calculations were carried out once with cold ions while having Lorentzian (kappa) distribution function (DF) for electrons and once with warm ions. The comparison of the results with the case of Maxwellian plasmas showed that the rate of expansion for the Maxwellian and kappa distributions differs substantially in high-energy tails. On the other hand, a more perfect and realistic DF including high-energy (super thermal) electrons has been modeled by kappa DF. It was found that, by increasing the population of energetic electrons, the expansion takes place faster and the ions are accelerated to higher energies. The effects of ions’ temperature have also been discussed through the paper. Finally, a relationship between “kappa” and “gamma” (polytropic exponent) has been defined and Lorentzian DF has been rewritten based on the polytropic exponent. Then a physical meaning has been defined for the “kappa” spectral index. 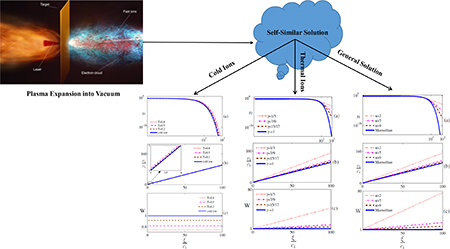