We investigate the Leggett–Garg inequalities and the relative entropy of coherence in the Bixon–Jortner model. First, we analytically derive the general solution of the Bixon–Jortner model by a technique of the Laplace transform. So far, only a special solution has been known for this model. The model has a single state coupled to equally spaced quasi-continuum states. These couplings cause discontinuities in the time evolution of the occupation probability of each state. Second, using the analytical solution, we show that the probability distribution of the quasi-continuum states approaches the Lorentzian function in a period of time between the initial time and the first discontinuity. Third, we examine violation of the Leggett–Garg inequalities and temporal variation of the relative entropy of coherence in the model. We prove that both the inequalities and the relative entropy are invariant under transformations of the energy-level detuning of the single state. 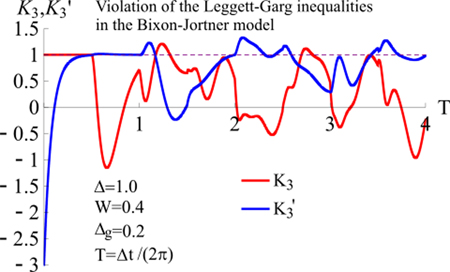