Analytical expressions for the constants of resolution in powers of inverse interatomic distance 1∕R are determined for the energy of the long-range interaction between two atoms A and B in their circular Rydberg states of equal principal quantum numbers nA = nB ≡ n ≫ 1, maximal angular momenta and magnetic quantum numbers lA = lB = |mA| = |mB| = n − 1 in the case of arbitrary orientation of the interatomic axis relative the axis of the m-quantization. Coefficients of the odd-power terms Ck∕Rk are derived for k = 5, 7, 9 from the first-order perturbation theory (PT) for the interaction Hamiltonian. The constant C6 of the van der Waals interaction ΔEvdW = −C6∕R6, determined from the second-order PT, is resolved into irreducible components. The combinations of irreducible components determine coefficients at Legendre polynomials and/or cosine functions describing the dependence of C6 on the angle between the interatomic and quantization axes. The asymptotic dependence on the principal quantum number C6 ∝ n12 is demonstrated analytically. Polynomials in powers of n are derived for extrapolation of calculated data to the case of arbitrary n. The transformation of attractive van der Waals force (C6 > 0) for low-energy states n < 6 into repulsive force (C6 < 0) for all higher-energy states of n ≥ 8 is demonstrated in numerical calculations. 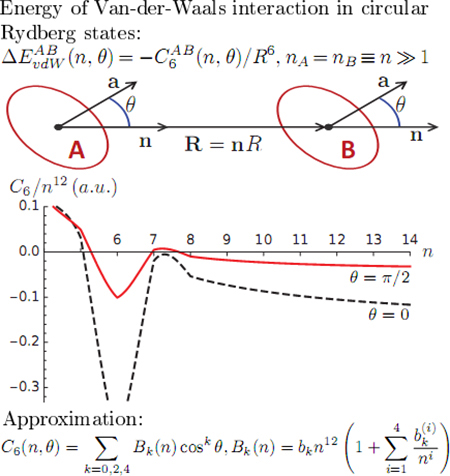