van der Waals interaction of an atom near a fiber tip

van der Waals (vdW) interaction and spontaneous decay rate of a two-level atom in the presence of a finite-length optical fiber are investigated using the truncated Born expansion approach. Where possible, results are compared with the infinitely extended fiber counterparts. Influence of the dipole moment orientation is analyzed. It is shown that, the fiber tip affects the axially oriented dipole the most by substantially suppressing the decay rate and raising the vdW potential energy. Knowing the vdW interaction and spontaneous decay rate for individual dipole moment orientations, the averaged quantities are obtained, which can be useful in comparison with experiments where the atomic dipole moment is randomly oriented. Results hint at the possibility of creating a three-dimensional trap for excited atoms near the tip of the fiber via vdW interaction. The vdW potential experienced by a ground-state atom is also discussed. 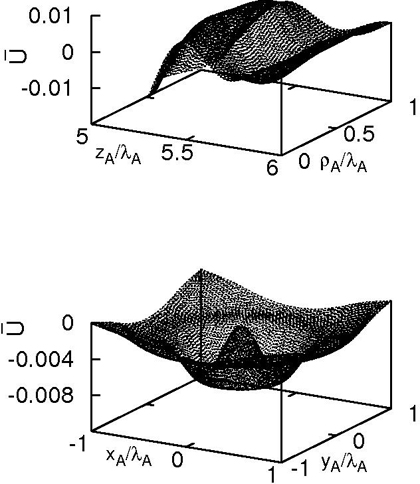