A recent experiment in a two-dimensional optical lattice with random disorder potentials [J.-y. Choi et al., Science 352, 1547 (2016)] provided evidence of nonergodic behaviour in a gas of strongly-interacting ultracold atoms. The authors found a critical disorder strength that separates system dynamics into an ergodic and a nonergodic regime which they interpreted as many-body localization transition. We model an analogous but smaller system numerically using a method based on tree tensor networks and try to follow the experimental setup as closely as possible. Our results support the experimental observation of the two dynamics regimes, where for weak disorders particles spread over the lattice and thermalize, and for strong disorders the system keeps a memory of the initial state even after fairly long evolution times. Because the imbalance and the entanglement entropy are not fully saturated at our longest evolution times, we propose to perform experiments with smaller systems and with longer evolution times that are also accessible in numerical simulations. Then, the comparison of experimental and numerical data can unambiguously resolve the question whether the observed effect is truly a case of many-body localization transition. 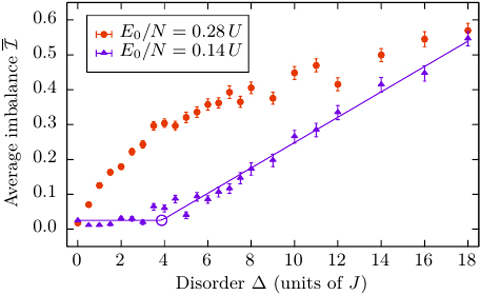