We report the observation of supercontinuum of Langmuir plasma waves, that exhibits broad power spectrum having significant spatio-temporal coherence grown from a monochromatic seed-wave, in one-dimensional particle-in-cell simulations. The Langmuir wave supercontinuum (LWSC) is formed when the seed wave excites side-band fields efficiently by the modulational instabilities. Its identification is achieved by the use of the tricoherence analysis, which detects four wave mixings (FWMs) of plasmons (plasma wave quanta), and evaluation of the first order coherence, which is a measure of temporal coherence, of the wave electric fields. The irreversible evolution to the coherent LWSC from the seed wave is realized by the wave–particle interactions causing stochastic electron motions in the phase space and the coherence of LWSC is maintained by the phase-preserving FWMs of plasmons. The LWSC corresponds to a quasi Bernstein-Greene-Kruskal mode. 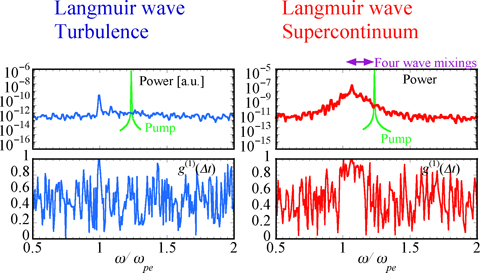