Raw cotton fabrics have been exposed to low-pressure non-equilibrium gaseous plasma to improve the adsorption of natural dyes as well as ultraviolet (UV) protection factor. Plasma created in a glass tube by an electrodeless radiofrequency (RF) discharge was created either in oxygen or ammonia at the pressure of 50 Pa to stimulate formation of oxygen and nitrogen groups, respectively. The type and concentration of functional groups was determined by X-ray photoelectron spectroscopy (XPS) and morphological modifications by scanning electron microscopy (SEM). The colour yield for curcumin dye was improved significantly for samples treated with ammonia plasma what was explained by bonding of the dye to surface of amino groups. Contrary, the yield decreased when oxygen plasma treatment was applied due to the negatively charged surface that repels the negatively charged dye molecules. The effect was even more pronounced when using green tea extract as the colouring agent. The colour difference between the untreated and ammonia plasma treated sample increased linearly with plasma treatment time reaching the factor of 3.5 for treatment time of 300 s. The ultraviolet protection factor (UPF) was over 50 indicating excellent protection due to improved adsorption of the dye on the ammonia plasma treated samples. 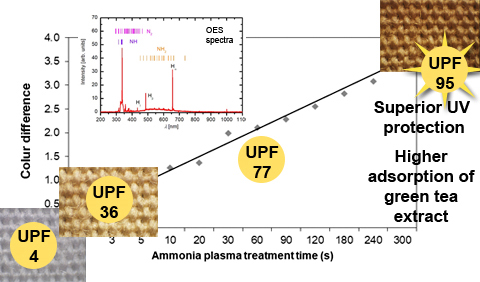