A new apparatus was constructed to investigate the visible and near infrared fluorescence spectroscopy of electronically excited helium over a wide range of pressures and temperatures, covering both the gaseous and liquid phases. To achieve sufficient throughput, increased sensitivity was established by employing a micro-discharge cell and a high performance lens system that allows for a large collection solid angle. With this set-up, several thousand spectra were recorded. The atomic 3s1S → 2p1P and 3s3S → 2p3P atomic transitions showed line shifts, spectral broadening and intensity changes that were dependent in magnitude on pressure, temperature and thermodynamic phase. While in the gas phase the lines showed little dependency on the discharge cell temperature, the opposite was observed for the liquid phase, suggesting that a significant number of atoms were solvated. Triplet lines were up to a factor of 50 times stronger in intensity than the singlet lines, depending on pressure. When taking the particle density into account, this effect was stronger in the gas phase than in the liquid phase of helium. This was attributed to the recombination of He2+, He3+ and He4+ with electrons, which is facilitated in the gas phase because of the significantly higher mobility. 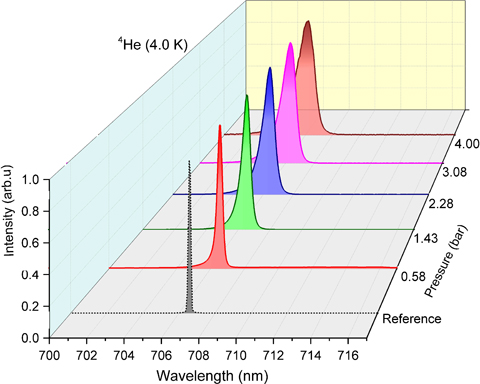