Non-uniqueness of the multi-temperature law of mass action. Application to 2T plasma composition calculation by means of a collisional-radiative model

This work is devoted to the calculation of the composition for a monoatomic plasma (argon in the case presented) for which the assumption of thermal equilibrium is not realized. The plasma composition is obtained from a CR model, taking into account free electrons and a great number of electronic levels of Ar atoms and Ar+ ions. This model is based on a large set of transition probabilities and reaction rate coefficients for radiative processes (spontaneous emission and radiative recombination) and on an extended database of direct and reverse reaction rate coefficients for collisional processes (excitation/de-excitation and ionization/recombination mechanisms). Assuming Maxwellian energy distribution functions for electrons and heavy chemical species, detailed balance equations are determined for all kind of reactions in the frame of the micro reversibility principle. From these balance equations, reverse rate coefficients are calculated as a function of direct reaction rates and of electrons and heavy particles translation temperatures (Te and Th respectively). Particular attention is paid to problematic chemical reactions with electrons involved on one side and only heavy species on the other side such as: Ar + Ar → Ar + Ar+ + e. The detailed balance relations obtained for ionization/recombination processes demonstrate the non-uniqueness of the multi-temperature Saha-Eggert law (i.e. non-uniqueness of the multi-temperature law of mass action). Multi-temperature argon plasma compositions obtained in the present work exhibit abrupt density variations. These sharp variations are characteristic of the transition between the domination of heavy particle reactions (at low temperature) and the predominance of electron collisions (at high temperature). 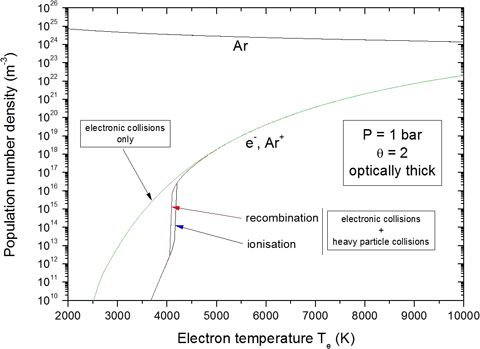