The characteristics of plasmas in a titanium hydride vacuum arc ion source were experimentally investigated by a temporally- and spatially-integrated optical emission spectroscopy method. A plasma emission spectral fitting model was developed to calculate the plasmas temperature and relative density of each particle component, assuming plasmas were in local thermodynamic equilibrium state and optical thin in this study. The good agreement was founded between the predicted and measured spectra in the interesting regions of 330–340 nm and 498–503 nm for Ti+ ion and Ti atom respectively, while varying the plasma temperature and density. Compared with conventional Boltzmann plot method, this method, therefore, made a significant improvement on the plasma diagnosis in dealing with the spectral profile with many lines overlapped. At the same time, to understand the mechanism of the occluded-gas vacuum arc discharge plasmas, the plasmas emission spectra, ion relative density, and temperature with different discharge conditions were studied. The results indicated that the rate of Ti metal evaporation and H desorption from the electrode would be enhanced with arc current, and the ionization temperature increased with the feed-in power of arc discharge, leading more H+ and Ti+ ions, but reducing the H+ proportion in arc discharged plasmas. 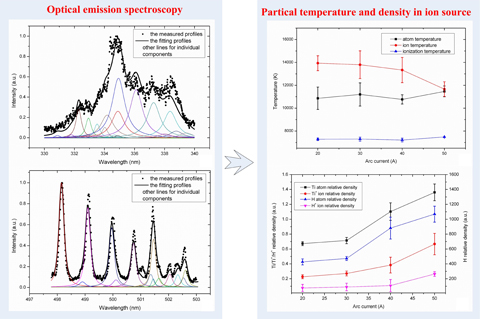