The processes in disordered solid neon irradiated with photons in the energy range of 4–400 Ry are studied using detailed Monte Carlo simulations taking into account cascade relaxation of ionized atoms. Trajectories of all secondary electrons and photons inside a spherical zone around the site of initial photoionization are analyzed. Energy absorbed in the zone and its distribution within the zone, distributions of concentrations of secondary inelastic processes, spectra of electrons and photons, and mean numbers of final ions are calculated. Secondary electrons, including those produced by cascade relaxation, are found to be the principal producers of inelastic processes. Cascade relaxation of ionized atoms is shown to be one of the crucial mechanisms in the effect of ionizing radiation on matter. 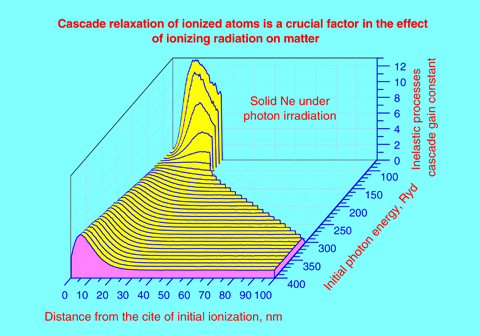