We derive Ehrenfest like equations for the coupled Gross Pitaevskii equations (CGPE) which describe the dynamics of the binary Bose–Einstein condensate (BBEC) both in the free particle regime and in the regime where condensate is well trapped. Instead of traditional variational technique, we propose a new Ehrenfest based approach to explore so far unrevealed dynamics for CGPE and illustrate the possibility of almost shape invariant states in both the regimes. In the absence of a trapping potential, when all the interactions present in the system are attractive, it is possible for an initially mixed Gaussian state to propagate with almost no change in width if the proper initial condition is satisfied. Even for repulsive intra-atomic and attractive inter-atomic interaction (gαβ) one can tune |gαβ| such that the width of the propagating wave packet remains bounded within almost about 10%. We also discuss the dynamics of the initially phase separated condensate and have shown the breakdown of the Gaussian nature of the wave packets due to collisions. However, when the BEC is trapped in simple harmonic oscillator (SHO) potential, for gαβ > 0, it is possible for an initially overlapping state to retain its initial shape if gαβ is less than a critical value (gαβc). If gαβ exceeds gαβc, an overlapping state can become phase separated while keeping its shape unchanged. 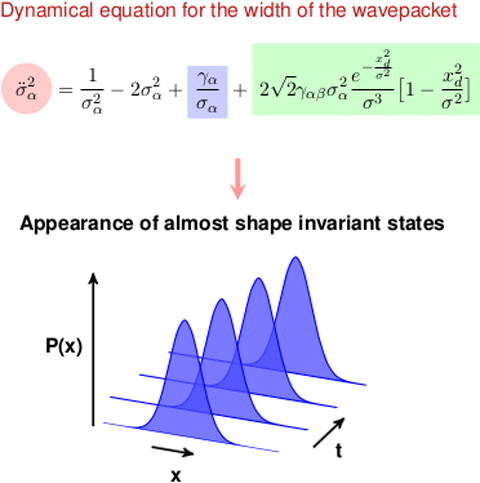