Two reactive sputtering techniques have been studied: direct current magnetron sputtering (DCMS) and high-power impulse magnetron sputtering (HiPIMS), operated in various Ar/O2 gas mixtures using a Ti target. The processes were characterized during different modes of operation including pure argon, metallic, transition and compound mode. Energy flux data as well as data on electron density and temperature were combined to obtain knowledge about the trends and changes in the investigated internal process plasma properties for the different modes investigated. Although there is a large reduction of the mass deposition rate (a factor 10 in DCMS and a factor 14 in HiPIMS), when transiting from the metal to compound mode, we detect no significant decrease of the total energy flux in DCMS and only a minor decrease in HiPIMS ( <20%). Such a result is surprising considering that the neutral flux contribution to the total energy flux is known to be significant. Instead, we find that the reduction of the neutral component is compensated by an increase in the electron and ion flux components, which is experimentally detected as an increase of the effective electron temperature and a slightly increasing (DCMS) or essentially constant (HiPIMS) electron density with increasing oxygen flow rate. 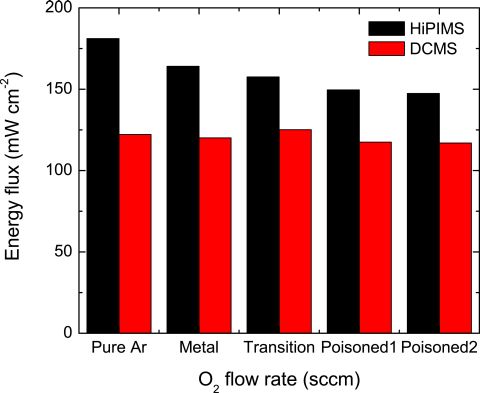