On the plasma confinement by acoustic resonance

In an applied research project on the development of a pulsed microwave sulfur lamp prototype of 1 kW, we have discovered an amazing phenomenon in which the plasma forms a ball staying at the center of the bulb despite gravity, thus protecting the glass from melting. In this paper, it is shown that this results from an acoustic resonance in a spherical mode. Measurements of the plasma response to short pulses are presented showing beats at the spherical resonance. It is demonstrated that the beats could result from the simultaneous excitation of two normal modes with a frequency difference of approximately 1%. One of the two frequencies matches precisely the microwave pulses repetition, a little below 30 kHz. Thus this one is due to a forced oscillation, whereas the other one is due to a free oscillation. The phase velocity of sound was calculated as a function of temperature in order to find the series of temperatures at which a resonance would occur if the bulb were an isothermal solid sphere. The mean temperature inside the actual bulb was determined from the only doublet of this series, that has characteristic frequencies close enough to cause the observed beats. In addition, one of these two modes has a spherical symmetry that can explain the plasma ball formation. The obtained mean temperature is consistent with the direct measurements on the bulb surface as well as with the temperature in the core of a similar plasma found in the literature. We have also proposed a model of the resonance onset based on the acoustic dispersion and the sound amplification due to electromagnetic coupling. 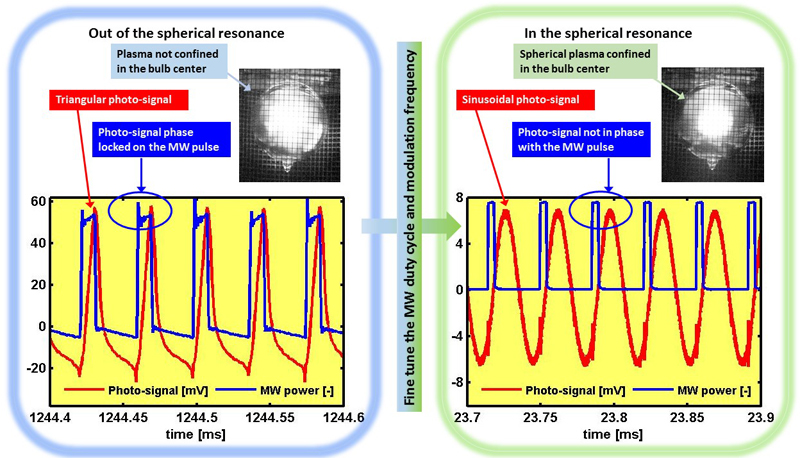