From synchrotron radiation to γ-ray emission

Relativistic jets of plasma are a key ingredient of many types of Active Galactic Nuclei (AGN). Today we know that AGNs are powered by the accretion of interstellar material into the gravitational field of a Super Massive Black Hole, and that this process can release as much power as an entire galaxy the size of the Milky Way, from a region that is comparable to the Solar System in size. Depending on the properties of the central energy source, a large fraction of this power can be involved in the acceleration of magnetized plasmas at relativistic speeds, to form large-scale jets. The presence of jets affects the spectrum of AGNs through the emission of synchrotron radiation and Inverse Compton scattering of low energy photons, thus leading to a prominent non-thermal spectrum, sometimes extending from radio frequencies all the way up to γ-ray energies. Here we review some characteristic processes of radiation emission in AGN jets, which lead to the emission of photons in the radio, optical, X-ray and γ-ray bands, and we present the results of a spectroscopic campaign of optical counterparts. We discuss our observations and their connection with γ-ray properties in a scenario that traces the role of relativistic jets in different classes of AGNs, detected in both the local and the remote Universe. 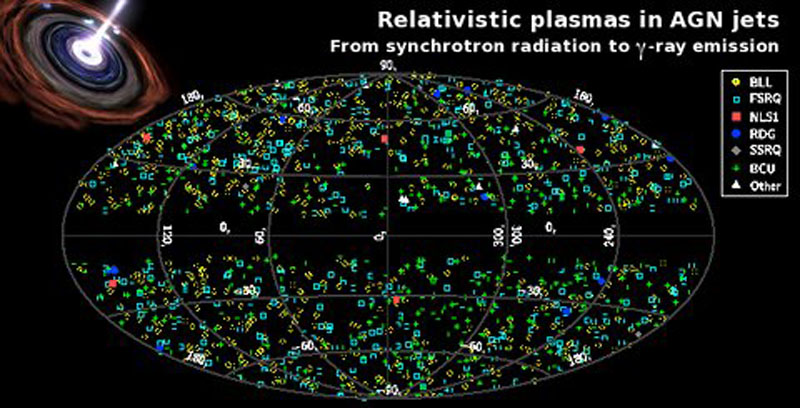