We investigate the ground state properties of anti-ferromagnetic spin-1 Bose gases in one dimensional harmonic potential from the weak repulsion regime to the strong repulsion regime. The Hamiltonian is diagonalized in the Hilbert space composed of the single particle wavefunctions and spin components. With the numerical diagonalization method, the density distributions, magnetization distribution, one body density matrix, and momentum distribution for each component are obtained. It is shown that the spinor Bose gases of different magnetization exhibit the same total density profiles in the full interaction regime, which evolve from the single peak structure embodying the properties of Bose gases to the fermionized shell structure of spin-polarized fermions. But each component displays different density profiles, and magnetic domains emerge in the strong interaction limit for M = 0.25. In the strong interaction limit, one body density matrix and the momentum distributions exhibit the same behaviour as those of spin-polarized fermions. The fermionization of momentum distribution takes place, in contrast to the δ-function-like distribution of single component Bose gases in the full interaction regime. 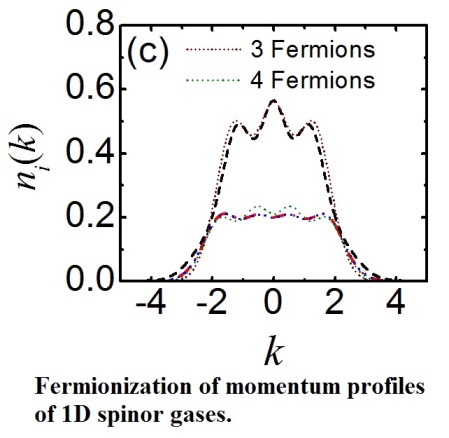