Theoretical study of physical and thermodynamic properties of AlnNm clusters*

Geometrical structures and physical properties, such as collision diameter, rotational constants, characteristic vibrational temperatures, dipole moment, static isotropic polarizability, enthalpy of formation of various forms of AlnNm clusters with n = 0,...,5, m = 0,...,5, are analyzed with the usage of density functional theory. Different isomeric forms of these clusters with the isomerization energy up to 5 eV have been identified by using the original multistep heuristic algorithm that was based on semiempirical calculations, ab initio and density functional theory approaches and comprises the elements of genetic algorithms. Temperature dependencies of enthalpy, entropy and specific heat capacity have been calculated both for the individual isomers and for the Boltzmann ensemble of each class of clusters taking into account the anharmonicity of cluster vibrations and the contribution of excited electronic states of clusters. Novel criterion of the stability of isomeric forms, based on the maximal vibrational energy of the modes of cluster, has been proposed. The potentialities of the application of small AlnNm clusters as the components of energetic materials are also considered. 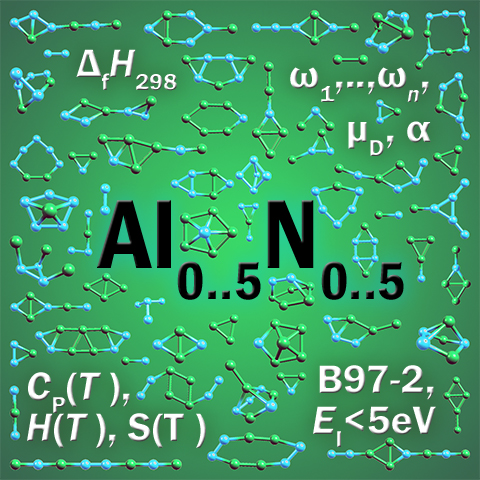