Umbrella motion of the methyl cation, radical, and anion molecules

A study of the umbrella motion of the methyl cation, radical, and anion molecules is presented. This is the floppiest mode of vibration of all three species and its characterization is of fundamental importance for understanding their reactivity. Minimum Energy Paths of the umbrella motions according to the hyperspherical treatment were obtained, by single point calculations, at the CCSD(T)/aug-cc-pVQT level of theory in the Born-Oppenheimer approximation. These energy profiles permit us to calculate the vibrational levels through the Hyperquantization algorithm, which is shown appropriated for the description of the umbrella motion of these three molecules. The adiabatic electron affinity and ionization potentials were estimated to good accuracy. Partition functions are also calculated in order to obtain information on the reaction rates involving these groups. 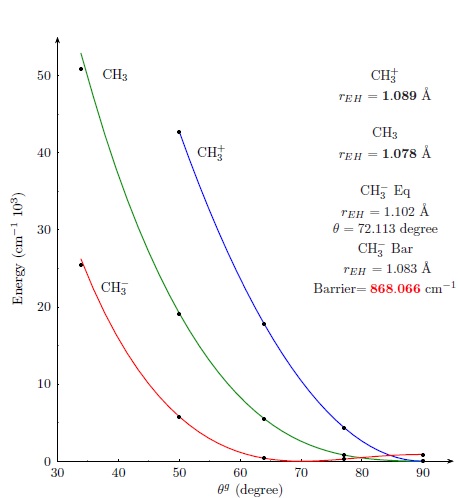