The electronic structure of rare earth (RE) doped Zn12O12 clusters – namely, REZn11O12 and RE2Zn10O12 with RE = Nd, Eu and Gd have been investigated within the framework of density functional theory formalism. Doping of a RE atom is found to be energetically favorable in this zinc oxide cluster. We have found that the cage structure of the host cluster Zn12O12 does not change significantly by the substitutional doping of a RE atom on Zn sites. The magnetic coupling between RE ions in the host cluster is found to be ferromagnetic. The static polarizabilities and optical properties of the RE doped Zn12O12 clusters have been studied based on the time dependent density functional theory. With RE doping, the polarizability increases as compared to that of the host cluster. The analysis of the optical absorption spectra indicate that the f electrons in RE doped clusters are significantly more involved in low-energy transitions. For Eu doped clusters give rise to more quenched oscillator strengths as compared to that of Nd and Gd doped zinc oxide clusters. With the increase in number of RE atoms, the red shift is observed in the optical spectrum of the zinc oxide cluster. 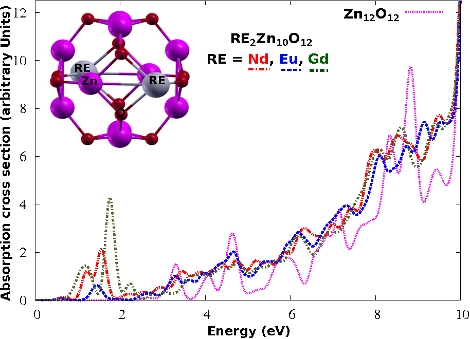