This article presents the investigation of the propagation properties of a Multi-Gaussian Schell-Model (MGSM) beam in a uniaxial crystal, orthogonal to the optical axis. The analytic expressions for the elements of the cross-spectral density matrix of an MGSM beam in such a crystal are derived. Using the derived expressions for numerical analysis, the distributions of the normalized intensity and degree of polarization for MGSM beams are studied. The results show that not only does the normalized distribution intensity of the beam form a flat shape, but also the distribution of degree of polarization reaches a plateau in the central area when propagating in a uniaxial crystals orthogonal to the optical axis. The parameters of the source and refractive indices are major factors that affect the distributions. With a suitable choice of parameters, the intensity distribution changes to a rounded rectangular plateau and the degree of polarization distribution changes to an elliptic plateau. The results also indicate that a uniaxial crystal can modulate these MGSM beam distributions, which is beneficial for the optical manipulation of microscopic particles and nonlinear optics, involving a specific profile and polarization. 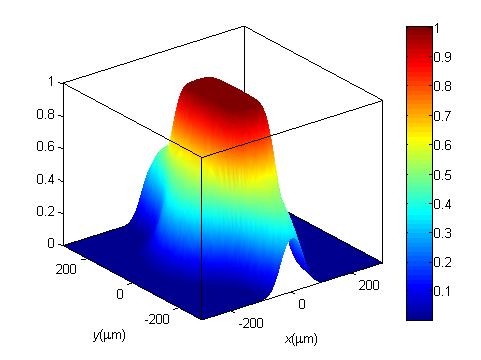