The Dirac Hamiltonian including nuclear recoil and vacuum-polarization operators is considered in a supercritical regime Z> 137. It is found that the nuclear recoil operator derived within the Breit approximation “regularizes” the Hamiltonian for the point-nucleus model and allows the ground state level to go continuously down and reach the negative energy continuum at a critical value Zcr ≈ 145. If the Hamiltonian contains both the recoil operator and the Uehling potential, the 1s level reaches the negative energy continuum at Zcr ≈ 144. The corresponding calculations for the excited states have been also performed. This study shows that, in contrast to previous investigations, a point-like nucleus can have effectively the charge Z> 137. 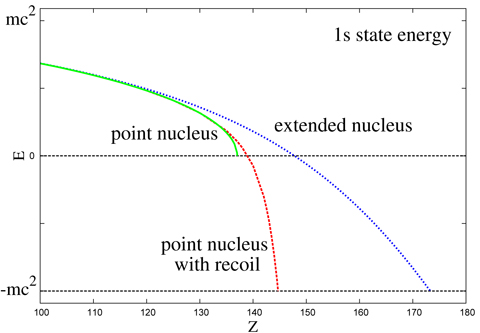