Bogolyubov Institute for Theoretical Physics of the National Academy of Sciences of Ukraine, 14-b Metrolohichna str., 03680 Kiev, Ukraine

Changes in the medium of biological cells under ion beam irradiation has been considered as a possible cause of cell function disruption in the living body. The interaction of hydrogen peroxide, a long-lived molecular product of water radiolysis, with active sites of DNA macromolecule was studied, and the formation of stable DNA-peroxide complexes was considered. The phosphate groups of the macromolecule backbone were picked out among the atomic groups of DNA double helix as a probable target for interaction with hydrogen peroxide molecules. Complexes consisting of combinations including: the DNA phosphate group, H2O2 and H2O molecules, and Na+ counterion, were considered. The counterions have been taken into consideration insofar as under the natural conditions they neutralise DNA sugar-phosphate backbone. The energy of the complexes have been determined by considering the electrostatic and the Van der Waals interactions within the framework of atom-atom potential functions. As a result, the stability of various configurations of molecular complexes was estimated. It was shown that DNA phosphate groups and counterions can form stable complexes with hydrogen peroxide molecules, which are as stable as the complexes with water molecules. It has been demonstrated that the formation of stable complexes of H2O2-Na+-PO4- may be detected experimentally by observing specific vibrations in the low-frequency Raman spectra. The interaction of H2O2 molecule with phosphate group of the double helix backbone can disrupt DNA biological function and induce the deactivation of the cell genetic apparatus. Thus, the production of hydrogen peroxide molecules in the nucleus of living cells can be considered as an additional mechanism by which high-energy ion beams destroy tumour cells during ion beam therapy. 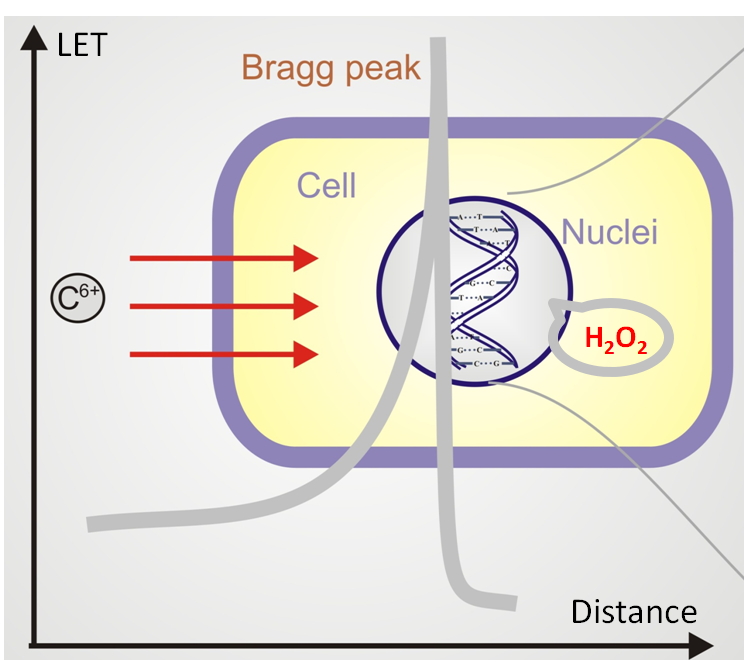