This work describes a simple thermodynamic model of the hydrogen gas at low densities and for temperatures going from those involving quantum rotations of ortho- and para-hydrogen up to the fully ionized state. The closed-form energy levels of Morse rotating oscillator given [D.C. Harris, M.D. Bertolucci, Symmetry and Spectroscopy (Dover, New York, 1989)] (but not those in Morse’s original paper) are shown to provide an internal partition function of H2 that is a sufficiently accurate representation of that exploiting the state-of-the-art spectrum of roto-vibrational levels calculated by Pachucki and Komasa [K. Pachucki, J. Komasa, J. Chem. Phys. 130, 164113 (2009)]. A system of two coupled quadratic equations for molecular dissociation and atomic ionization at thermodynamical and chemical equilibrium is derived according to the statistical mechanics by assuming that the system is an ideal mixture containing molecules, neutral atoms and noninteracting protons and electrons. The system of two equations reduces to a single quartic equation for the ionization unknown, with the coefficients dependent on the temperature and the specific volume. Explicit relations for specific energy and entropy of the hydrogen ideal gas/plasma model are derived. These fully compatible equations of state provide a complete thermodynamic description of the system, uniformly valid from low temperatures up to a fully ionized state, with electrons and ions relaxed to one and the same temperature. The comparison with results of other models developed in the framework of the physical and chemical pictures shows that the proposed elementary model is adequate for computational fluid dynamics purposes, in applications with the hydrogen gas under diluted conditions and when the dissociation and ionization can be assumed at thermodynamical and chemical equilibrium. 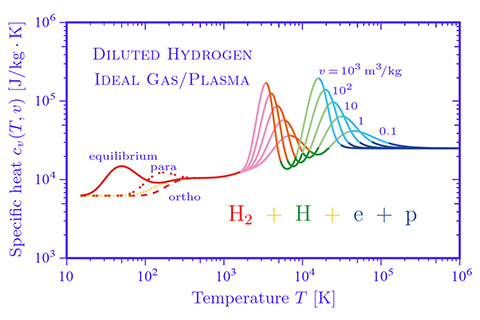