Three-coupled fourth-order nonlinear Schrödinger equations describe the dynamics of alpha helical proteins with the interspine coupling at the higher order. Through symbolic computation and binary Bell-polynomial approach, bilinear forms and N-soliton solutions for such equations are constructed. Key point lies in the introduction of auxiliary functions in the Bell-polynomial expression. Asymptotic analysis is applied to investigate the elastic interaction between the two solitons: two solitons keep their original amplitudes, energies and velocities invariant after the interaction except for the phase shifts. Soliton amplitudes are related to the energy distributed in the solitons of the three spines. Overtaking interaction, head-on interaction and bound-state solitons of two solitons are given. Bound states of three bright solitons arise when all of them propagate in parallel. Elastic interaction between the bound-state solitons and one bright soliton is shown. Increase of the lattice parameter can lead to the increase of the soliton velocity, that is, the interaction period becomes shorter. The solitons propagating along the neighbouring spines are found to interact elastically. Those solitons, exhibited in this paper, might be viewed as a possible carrier of bio-energy transport in the protein molecules. 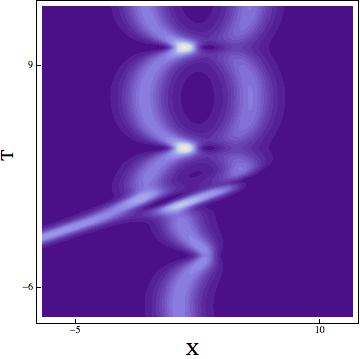